How to Overcome Insecurity Issues and Reclaim Power Over Your Life 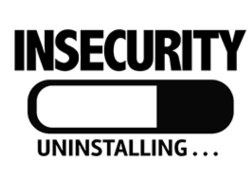 Don’t let your insecurities hold you down or from accomplishing your dreams. It’s time to fight back and learn how to overcome insecurity issues.

High school was not a good time for me. I was a little chubby, dressed as a tomboy, and I didn’t have a real relationship until I was nineteen. I didn’t have the “hottest girl in school” experience as some people did. In fact, most of my high school experience I worried what people thought of me, if I could pull off wearing a dress, or if I would ever be kissed.

Of course, those things happened but my insecurities allowed them to happen much later in life. See what insecurities do to someone?
Now, I’m not saying I became the hottest woman on the planet and now have hordes of men following me, but I grew into my skin and learned to love myself. Of course, I’m still scared about doing many things. We all have insecurities, but you must learn to crush them.

#1 You’re going to make mistakes. Listen, no matter how much you work on yourself, you will make mistakes. You’re human. It’s a part of life and how we learn. And if you think you learned everything there is to know, you’re wrong. So, this is something you must accept. Expect mistakes and accept them because they’ll happen.

#2 Your past shapes your insecurities. There’s a reason why you’re insecure. It’s because something negative happened to you in the past. You don’t want it repeated. I completely understand why, but your past actually holds you back from prospering. Let go of the negative past experience because it’s not going to happen again.

#3 Stay away from comparisons. If we all compared ourselves to each other, well, we’d all be depressed. Of course, there’s someone else out there smarter than you or with a nicer car or smile. There’s no doubting that. But that’s not the point. The point is you are who you are, and you’re going down a different path than them. Focus on your path because that’s the only path that matters.

#4 Focus on self-approval. In today’s society, it’s mainly based on the approval of others. People like our Instagram posts or our Facebook statuses and this is attached to how funny or good looking we think we are. But it’s all wrong. You shouldn’t be focusing on what other people think of you but rather what you think about yourself. That’s the only way others love you.

#5 Learn to love your flaws. Because you’re flawed. It’s as simple as that. You’re flawed just like everyone else. So, accept your flaws, they’re going to be around. You, as an entire person deserve love—your flaws included. Have a crooked nose? Embrace it. Do you snort when you laugh? Own it.

#6 Insecurities are connected to low self-esteem. Why are you filled with insecurities? Because you don’t think highly of yourself. If you don’t feel good about who you are on the inside then you’re going to be insecure. You want validation from others to make sure what you do is socially approved. If you want to know how to overcome insecurity issues, start by learning to love yourself.

#7 Be independent. Many people, when feeling insecure, latch onto someone almost as if the other person is their security blanket. Now, I get it. It’s scary to do things on your own, but having them there is just a placebo effect. You can do these things without them, but you’re scared. But remember, they won’t always be there when you need them, it’ll just be you.

#8 Know that you can do it. Okay, so, you screw up or make a mistake, but you did it, right? That’s what matters at the end of the day. Not if you made mistakes, but you were able to do it on your own. Believe and trust in yourself that you’re capable of doing whatever you put your mind to.

#9 Write down your fears. You need to know what you’re scared of. We all have fears but when you write them down on paper, sometimes they don’t look as scary as you thought they were. Read them to yourself and ask yourself if they’re rational. How many of these fears were created in your mind out of negative thoughts? Finding the root of your fears helps you tackle them.

#10 Ask yourself why you say no. When you say no to something, ask yourself why. Why are you saying no and why aren’t you saying yes? Is your answer fear-based? Saying yes leads to unexpected things, but it doesn’t necessarily mean that they’re negative. That’s just how you perceive it.

#11 Hang around positive people. If you’re around people who live in fear, well, chances are you are too. The people you spend your time with influence the choices you make. Why? Because you seek their approval. If they don’t think you should do something, most likely you won’t. So, surround yourself with positive people who encourage you to try new things