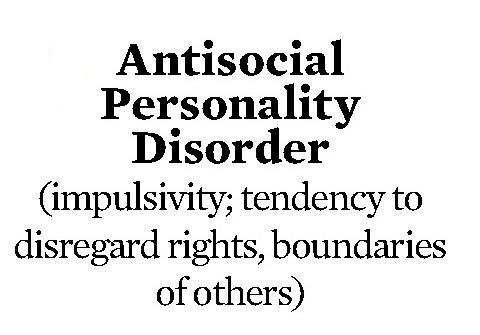 People with antisocial personality disorder may disregard the rules of behavior that are considered acceptable in a group or society, lie constantly, as well as placing others at risk for their own benefits, it is sometimes referred to as sociopathic personality disorder, or sociopathy.

Can these people be helped?

Unless the person risks harming their self or others, hospital care is not needed. They are advised to be seen by a counselor, to be taught to understand their disorder, learn to control it, and change their behavior. Insight-oriented forms of psychotherapy are generally not helpful to people with ASP. For such a disorder I would recommend Cognitive therapy

Therapists must be aware of their emotions before being involved with an ASP patient. No matter how stable, they are to helping the patient there is a big risk that the patient could have an effect on the therapist. Best type of therapist that is needed for such a task is someone who can anticipate their emotions and present an attitude of acceptance without moralizing.

Is medication needed for ASP?

No medications are routinely used or specifically approved for ASP treatment. Several drugs, however, have been shown to reduce aggression, a common problem for many antisocial.

The best-documented medication is lithium carbonate, which has been found to reduce anger, threatening behavior and combativeness among prisoners. More recently, the drug was shown to reduce behaviors such as bullying, fighting and temper outbursts in aggressive children.

Phenytoin (Dilantin), an anticonvulsant, has also been shown to reduce impulsive aggression in prison settings.